Most seniors prefer to spend their retirement reading newspapers, tending to their garden or taking care of their grandchildren.

But not Manmohan Singh Randhawa, 79, a plantation owner based in Kuala Klawang.

Whenever the octogenarian is not busy with his business, he spends his time at Virsah (meaning community in Punjabi) Gallery, a heritage studio he established in 2019.

“The gallery has more than 400 objects that I have collected over 50 years. It includes cooking utensils, swords and books from Punjab, as well as other heritage items from the Malay, Chinese and Indian communities,” Manmohan said during a conversation in Kuala Klawang. This sleepy town is 30 km from the state capital, Seremban.

Manmohan understands the importance of preserving and recording Malaysia’s rich heritage for future generations. The grandfather of five wants his gallery to play a vital role in giving people the opportunity to put the past and present into context.

“I have always been interested in history, heritage and culture since my youth. I am interested in learning more about the heritage of the different communities. It is interesting to learn how communities like the Malays, Chinese, Indians and Punjabi take pride in their traditional kitchen utensils, books or musical instruments,” Manmohan said.

The father of three was born in Amritsar, Punjab in 1942. He emigrated to Malaysia when he was 14 years old. His ancestors owned plantations and Manmohan took over the family business when he was in his twenties.

The spacious gallery is located on the first floor of a store lot on Jalan Dato’ Syed Ali.

The gallery displays items including kitchen utensils, swords and books from Punjab, as well as other heritage items from the Malay, Chinese and Indian communities.

Much of the gallery focuses on kitchen wares used in North Indian (particularly Punjab) and South Indian homes.

“There are mixed objects in the gallery, including Malay, South Indian, Punjabi and some Chinese objects. Most of the items are from my family’s collection. Some objects are from different parts of northern India. ‘India,’ the soft-spoken man shared, adding that his gallery is open to the public.

The owner of a rubber and oil palm plantation has dedicated a room to display old-time farming tools, including rubber knives like the jabong and v-groove, latex cups of clay and wooden racks used to dry latex sheets. An antique scale is one of Sarminder’s favorite items at the gallery.“A lot of younger generations have never seen half the tools in this room,” Manmohan says, pointing to the ammikallu (millstone), chakki (stone grain mill) and butter churn.

“While there are newer and modern equipment on the market, it is essential to learn about these age-old tools used by our ancestors decades ago,” Manmohan said.

He stored most of the objects in the basement of his house before opening the gallery.

Many visitors to Klang Valley, Melaka and Negri Sembilan have visited this scenic gallery since last October, when interstate travel was again permitted.

“People, especially the Sikh community in Kuala Lumpur, visited my gallery. Some of them had never seen most things, and they were happy with what I had.

“Most of them were impressed with my stamp and coin collections. Many people were also surprised that I have banana currency (dollar bills issued by the Japanese government) used in Malaysia during World War II (1942-1945). I’m always happy when they tell me they’ll bring their friends to my house,” Manmohan said. 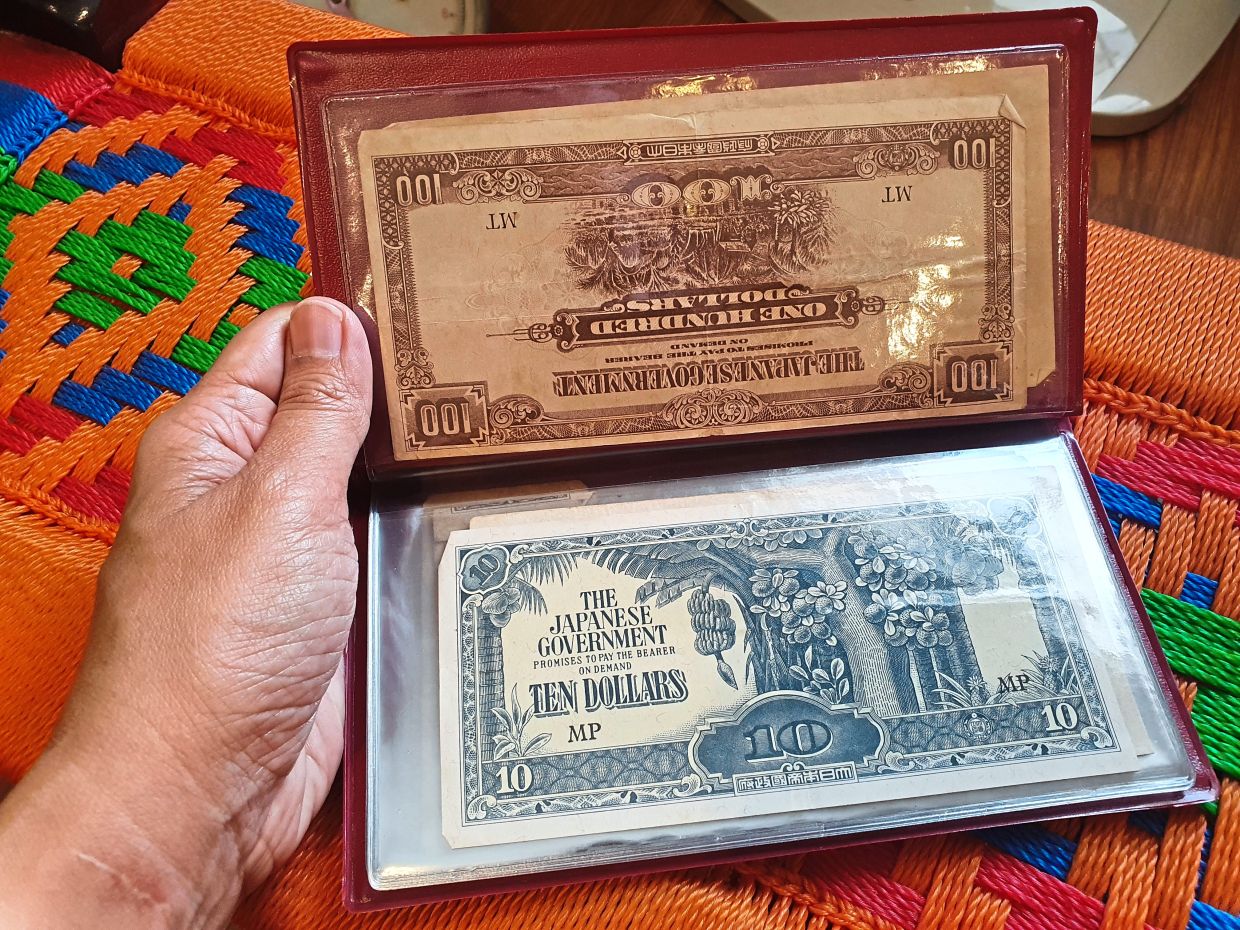 Banana money (dollar notes issued by the Japanese government) used in Malaysia during World War II has been in the possession of Manmohan for decades.

While the Virsah Gallery is up and running, Manmohan is not ready to rest on its laurels. So in his spare time, Manmohan and his two sons sometimes travel long distances to search for vintage items to display in the gallery.

“During the floods in December, I saw period objects in the homes of some flood victims. Unfortunately, these objects were thrown outside their homes. Even though I offered them money, they weren’t willing to part with the items,” he said with a shrug. Sarminder was roped in to help Manmohan set up the gallery.In total, the businessman spent around RM100,000 to set up the gallery. In addition, his wife, Sarminder Kaur, 81, his three children and his grandchildren have been mobilized to help turn his dream into reality.

It took a lot of effort to design the place, polish the brassware and label each item in Punjabi and have it transliterated. It’s a lot of effort, especially for Manmohan, who turns 80 in September.

“It’s my sewa (community service in Punjabi) for the community. When I’m gone and if my children or grandchildren don’t want them, I want these items to be donated to different societies. My wish is that these objects will be exhibited for future generations to come.